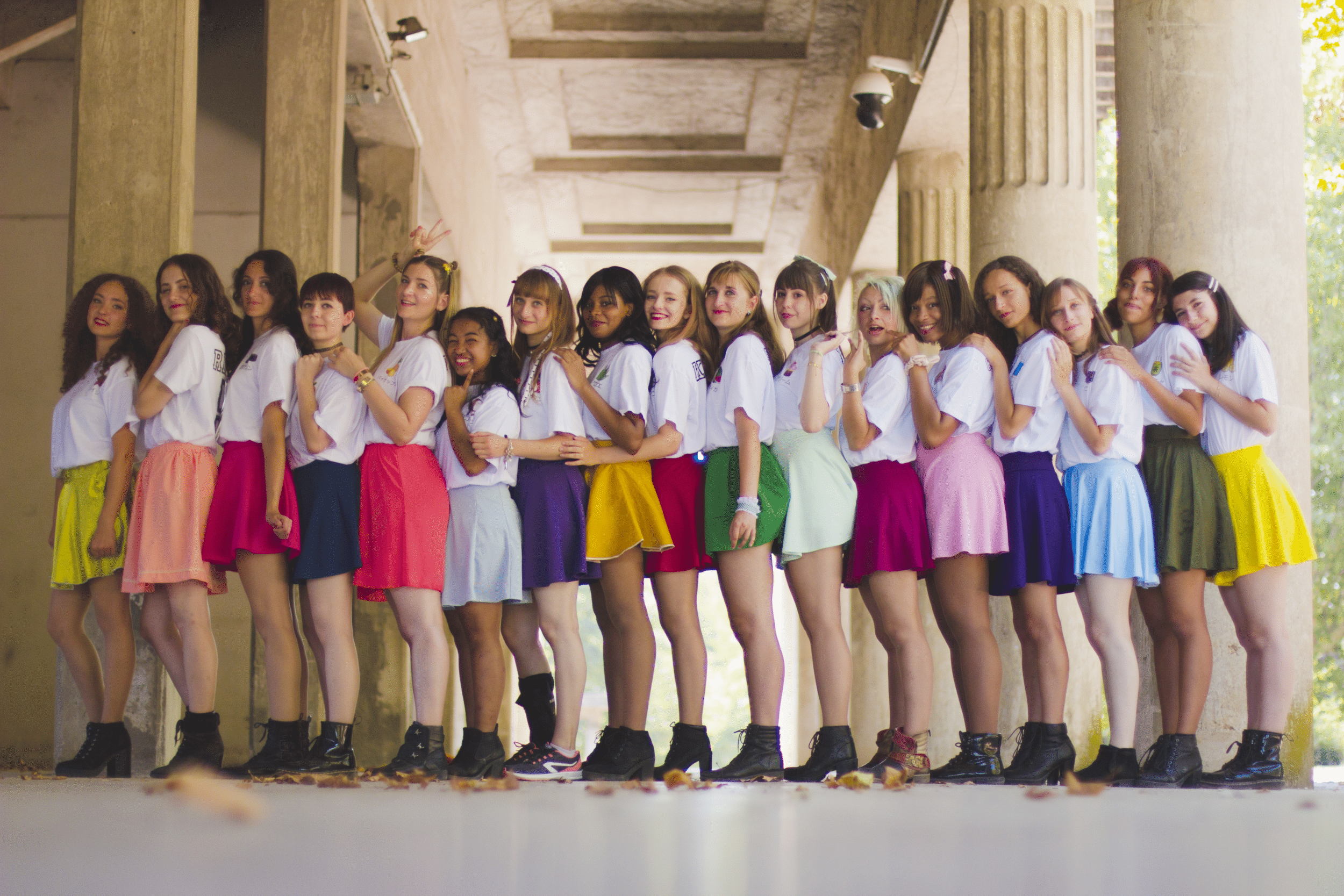 Amaitsuki (in Japanese 甘い月, literally « sweet moon ») is a non-professional dance and vocal unit aiming to spread J-pop (Japanese popular music) culture in France. Our main activity is to dance and sing on Japanese idols’ most famous songs. However we also intervene, on demand, during events all around France to explain the Japanese idol phenomenon, its origins and its impacts on the current Japanese society. Amaitsuki is currently one of the most active French idol groups with more than 10 years of existence and more than 300 videos on Youtube. The group’s strength is to accept members all over France (also including Luxembourg, Switzerland and Belgium) to be able to touch as many people as possible by covering a vast area. Thus, we go on stage for shows in Paris, Lyon but also Dijon and Epinal and other towns. With the aim to represent best what is the Japanese pop culture, we dance on music from different bands: virtual groups (Vocaloid), female Japanese bands (AKB48 or Hello!Project) but also male Japanese bands (Arashi, Hey!Say!Jump…from the Johnny’s Entertainment).

Momo and Youshu met in August 2008 and decided to create together a group to sing and dance on various Japanese pop songs. They mainly focused on Hello!Project, AKB48, Perfume and Vocaloid.
Amaitsuki did a lot of shows with other groups and associations (TR4KSPPA, which helped Amaitsuki to get its bearing at the beginning, Dansuki, ChocoHearts…).
In 2011, Amaitsuki joined the association Dansuki and realised a lot of shows all over France.
In 2013, Amaitsuki left the association Dansuki to become independent and created its own association named: Amaitsukiland.
Since summer 2013, the group also started creating its own original songs.

On August 2015, after 7 years as the co-leader of the group, Momo decided to leave to concentrate on her on-going life. She, however, remains a member of the association as an adviser for the youngest.

In Summer 2016, Amaitsuki was contacted by the Consulate of Japan in Lyon to perform on stage during the “Fêtes Consulaires” on the famous “Place Bellecour”. It was a first for the group as 12 members performed on the same stage together.
A few months later, in September 2016, when we decided to organize auditions for the 8th generation of Amaitsuki. Momo joined us and became Staff-Manager! For the first time in 8 years, the audition was opened for girls living in Luxembourg, Belgium, Switzerland and even in Tokyo for native French speakers living in Japan, like Kyandii. Facing a high rate of applications, the “directory board” of the association decided to create 2 rounds-auditions: the first round took place online and we gathered in the second one the finalists for a two-days dance and vocal training session in Lyon.

On April 25th 2018, 33 Degrees announces a contest aimed at amateur dance and vocal cover acts to win the opportunity to perform as opening act for Angerme’s very first concert in France. The competition featured 28 groups and solo performers, but Amaitsuki managed to keep up and win this once in a lifteime chance! They performed in La Cigale (Paris) on June 3rd 2018 in front of more than 600 Angerme fans. It was an unforgettable memory and the best gift the group could ever dream of for our 10th anniversary.

During Japan Expo 2018, Amaitsuki had the opportunity to be contacted again by 33 Degrees to organize activities for the official H!P booth. Kurimu, Ume, Matcha and Remon were staff on the H!P booth for 4 days in the biggest event in France on Japanese culture. Between quizz, karaoke and wotagei classes, the 4 members had the honour to interview Niigaki Risa, former Morning Musume member and guest of Japan Expo to celebrate Hello!Project 20th anniversary.

On August 28th, Youshu, leader and co-founder of Amaitsuki with Momo, decided to graduate from the main group after 10 years of activities to join the OG members and have more time for personal projects. At that time, she announced 3 new co-leaders : Kyuuri, Mizu and Remon.

In November 2018, Amaitsuki was contacted by H!P staff to have the chance to interact with Ayano Hamaura and Minami Nomura, two members of Kobushi Factory within the Harosute (youtube). Momo, Reishi, Matcha and Aroe thus coulf talk with idols they admire and answer questions in English and Japanese.

In January 2019, following the 2nd round of the 2018 audition, Amaitsuki welcomed 5 new members from Paris and Switzerland, the total number of members reaching 23 !