Amaitsuki as opening act for Angerme?!

The story begins on April 25th 2018. A large number of Amaitsuki members had decided to meet up on June 2nd, the day before the very first Angerme concert in France, to film a new dance cover. But our plans were shaken up by some surprising news: 33 Degrees, the concert organizer, decided to launch for the first time a contest to give the opportunity to an amateur group or artist to perform as opening act for Angerme! We had until May 10th to send a video, then do our best for it to be noticed amongst all 29 candidates. We decided to send our dance and vocal cover of Juice=Juice’s “Fiesta! Fiesta!”, filmed a few months before. We received some questions about why we chose this video and we though it’d be interesting to answer them here.

Why not filming a new cover for the contest?
Very simply, because we all live in different parts of France, and because it was university exam season, we could not easily meet up.
Why not a cover of an Angerme song? (Tsugitsugi Zokuzoku, Dondengaeshi?)
These two covers were filmed a long time ago compared to “Fiesta! Fiesta!”, and this song was iconic as it was released for Juice=Juice’s world tour. We thought it’d be relevant for the contest. Of course, the high quality of the video, produced and edited by Kabuki Studio, also played in making this choice 😉

All members watched the videos from all 29 participants and it honestly motivated us so much! We spotted some groups that some members had been following for a while, and discovered new ones. It was really motivating, but also very stressful. We had no idea how our video would be perceived by the audience.

At this moment, Kyandii had a brilliant idea! (note from Kyandii, translating this post: I know I know ;D) After proclaiming herself as community manager, she started a communication strategy and literally harassed people on Twitter by posting everyday about the contest x) – that said, we are really really thankful! Small bonus, we also tried ourselves at streaming live on Showroom, Facebook, Twitter, Youtube and Instagram, in all three languages (French, English, Japanese) when it was possible! It was a fun experience with lots of positive feedback and we want to do this again as soon as possible 😉 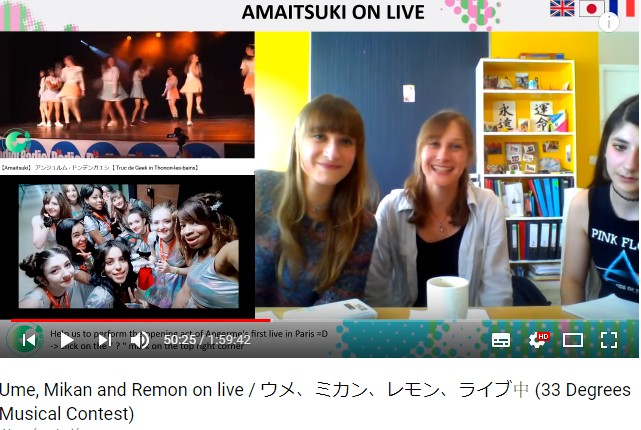 Communicating is extremely important, but it’s not all about that! We received the results on May 25th… a little bit more than a week before the concert! Since this opportunity was such a huge deal for us, we could not afford waiting until the results to decide on a setlist, do some audio mix and distribute the lines for 11 people. Before the announcement, we met up to figure out what we would do if we were to win, but also which song we would cover on June 2nd if we were to lose. Of course, we were really nervously waiting for the results and I know some of us could not even sleep the day before! 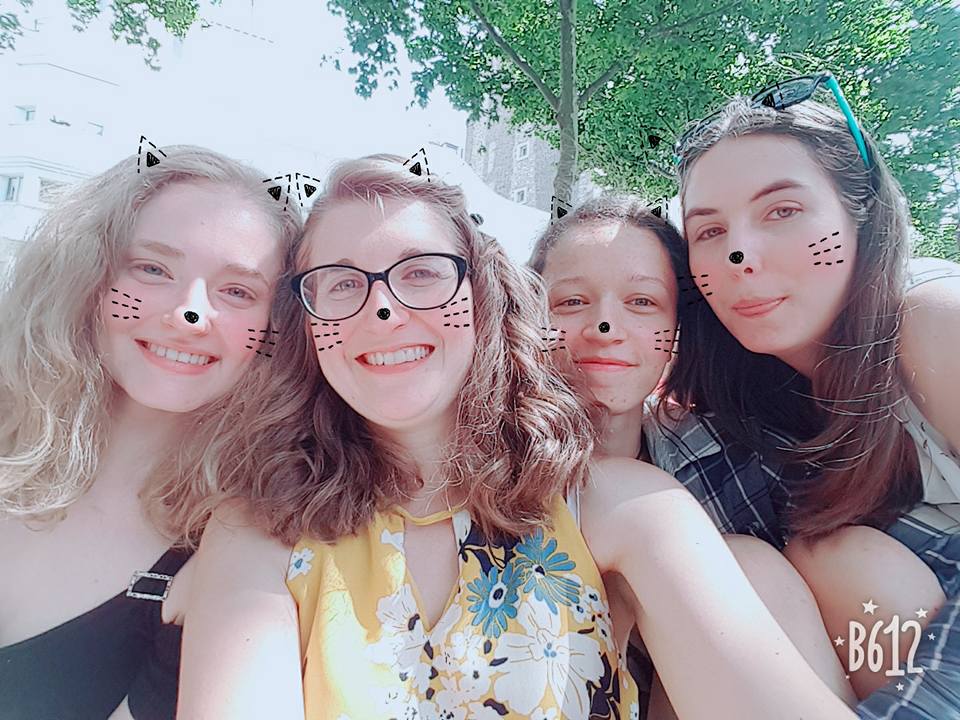 As for me, what I felt when the results were announced was a bit odd. Some members cried, and I was of course extremely happy, but also worried. Could we deliver on such a big stage in front of so many Hello!Project fans? Will the other participants cheer for us? I think I was focused on what others would think way too much. But now it was D-7, so there was no time to worry! We had no other choice than do our very best and perform something that would show who we are.
This was why we chose “Oh my wish!” and “Sakura Night Fever”: first, a challenging formation dance, and second, a upbeat cheerful dance to have fun with the audience.
But I now know what you’re thinking! “But you guys are all scattered all over France, right? How did you learn this within one week?” To which I will answer: just as we usually do, except in four times less time! A formation and positions sheet had been prepared, everyone had learnt their moves by themselves at home, some did private Facebook lives to explain some tricky moves to others, and we met up for only one big rehearsal on Saturday June 2nd.
Because of classes, trains and time schedule, we could not be together on Saturday until 1pm. We started practice at 1pm, and it ended at around 8pm! I think it was one of our most intense practices, with the least breaks or chit-chat time. Said like this, it does not sound very fun, but we all knew we could not afford to lose time since we were on such a tight schedule!

The Dance team: Kyuuri, Painappuru, Mikan (Mizu not on the first picture)

D-Day! Finally!
We had to be at La Cigale at 12pm sharp to check out the stage, do some sound checks, final rehearsals, get ready and wait until 8pm to perform as opening act. I will admit that, just like all of us, I was extremely excited to meet the Angerme members in the venue. But sadly, all dreams cannot become true… we were already so happy to perform in such an iconic venue, in front of such a big audience, that I cannot say I have any regret. Honestly if I had to have only one, it would be that we could not meet Angerme as a group. Some members ran into them by chance, from afar or from up close, backstage or in the venue, and could say a few words to them, but we could not ask them questions or have a talk with them. That said, Amaitsuki are a positive bunch! We asked 33 Degrees one small favor: to be able to watch their rehearsal from afar. Much to our surprise, they said yes! We kept a very low profile to not be a burden during their sound check, but as soon as we stepped inside the room, the Angerme girls turned to us and started singing the “Fiesta! Fiesta!” chorus! We were so shocked and happy! I can still remember some Amaitsuki members – not dropping any name – sobbing for 10 minutes straight through the entire Angerme rehearsal 😉

The most surprising and moving thing was probably to see four members of Angerme in the room during our own sound check. I do not know whether if they were curious about Amaitsuki and were there since the beginning, or if they were attracted by the “Oh my wish!” instrumental, but they cheered for us by dancing to “Sakura Night Fever” and even doing some calls during the song! Some members were even backstage behind the curtains during our opening act performance. We did not expect this at all and it was a bit of a surprise for the girls realizing they were watched in the middle of “Oh my wish!” ! It is such an amazing memory and we wish we could have thanked them properly as a group for cheering so much for us.

I just realized I forgot to talk about something extremely important from this experience: stress! As for me, it was the second most stressful live performance of my life… and it was only seven minutes long! My most stressful live performance was actually my very first one. I remember I was wondering what was I even doing there, and I was so anxious about remembering 45 minutes worth of songs and dances I just wanted to go home xD. Seven minutes seems a lot easier, but the final speech at the end made me so anxious too. I had never spoken Japanese in front of so many people before and I was scared of blacking out and forgetting the words. 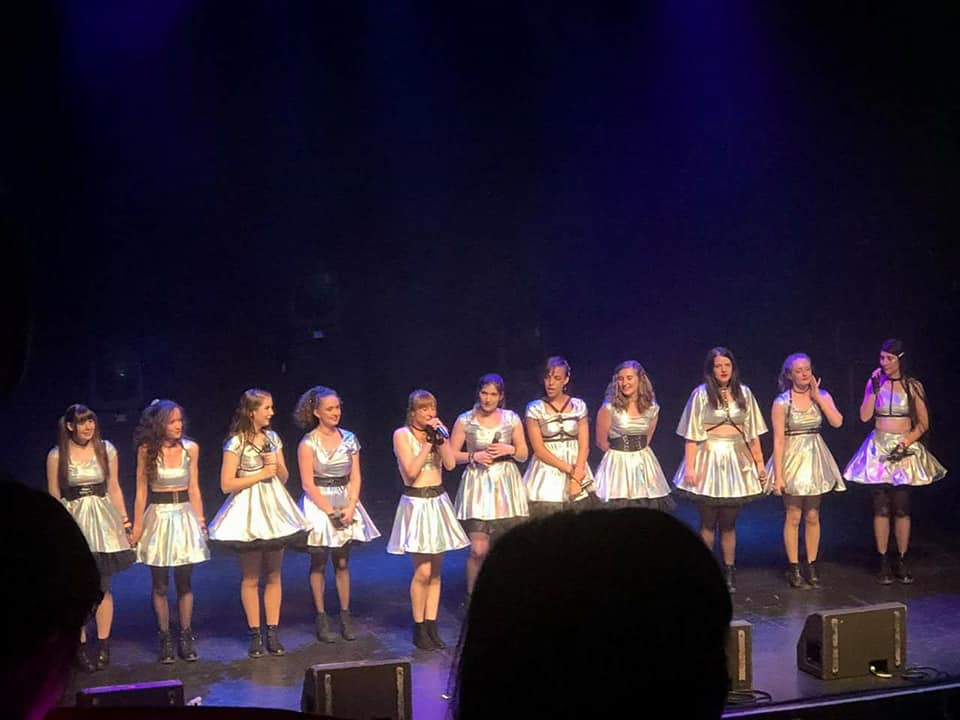 What else? Should I mention some girls had their high school graduation exams a few days later? x) That half of us were in tears at the moment we stepped out of stage after the performance (probably because of all the stress going away all at once)? I learnt only later that some of them started crying on stage during my speech in Japanese! It was not that sad or tear-jerking at all but I am glad they were moved anyway!

And I’m forgetting the most important thing! The warm welcome from the audience was simply incredible. That glowstick ocean, these calls and their amazing energy, this dialogue that started between the stage and the audience, they’re all unforgettable memories!

We would like to thank the 33 Degrees staff for the organization, their professionalism and their patience, and the staff members from La Cigale for their warmth and for cheering for us right before going on stage. We felt like we were so welcomed and we were really happy we could chat with some Angerme fans after the concert ended. Thank you to all of you who came to see us, to those who sent us the cutest messages and all of those who had faith in us! Without you all, this dream would never have come true.

I’m sure you guys are all thinking “What about her 10 years anniversary thing again? Isn’t she gonna talk about it once more?”. But if you insist! It was a complete coincidence that we were able to be on stage at La Cigale for Amaitsuki’s 10th year, it feels like a dream! It is something that we will remember forever. My little ad is over, thank you for reading until the end 😉

Mikan
Translated from French by Kyandii