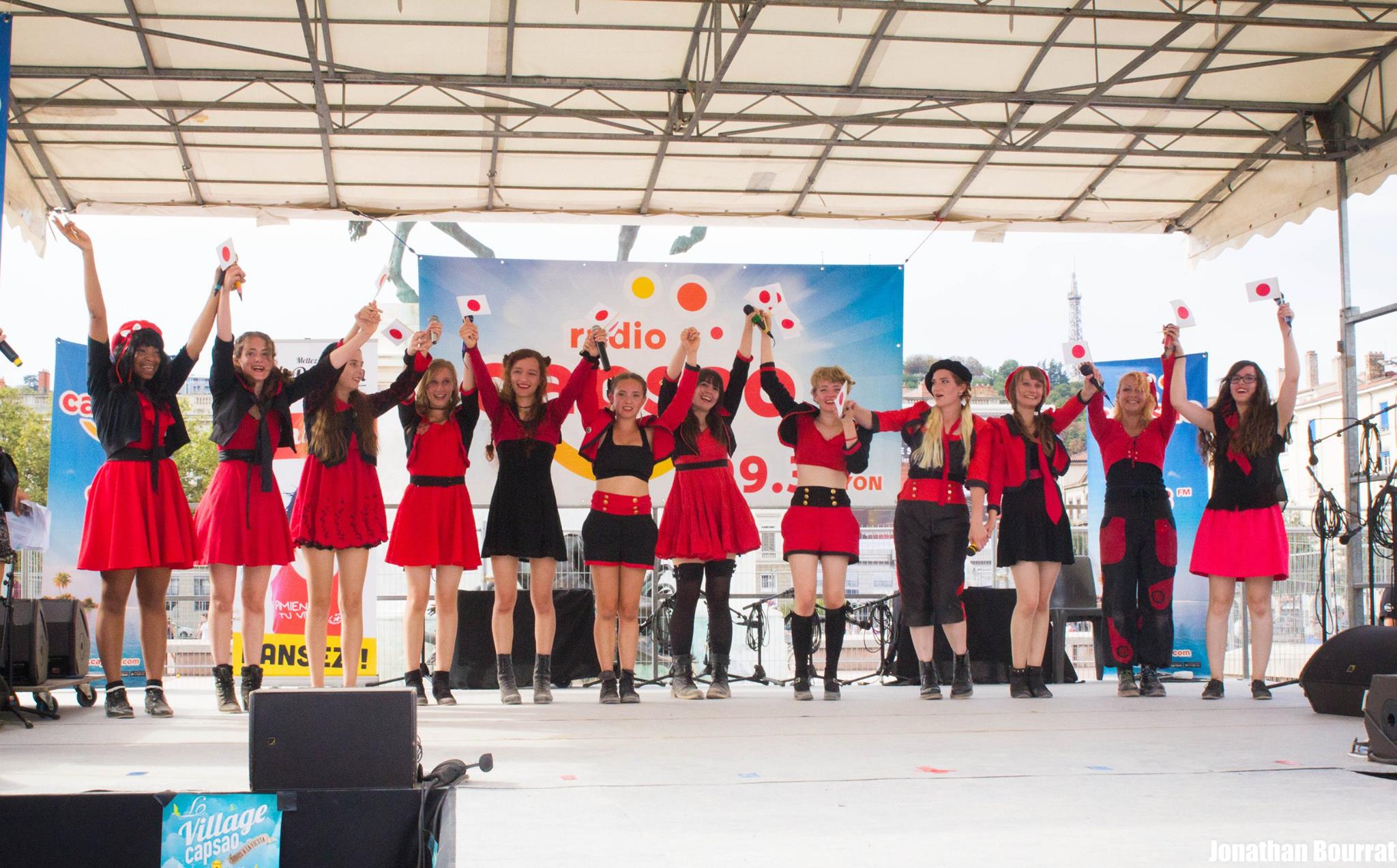 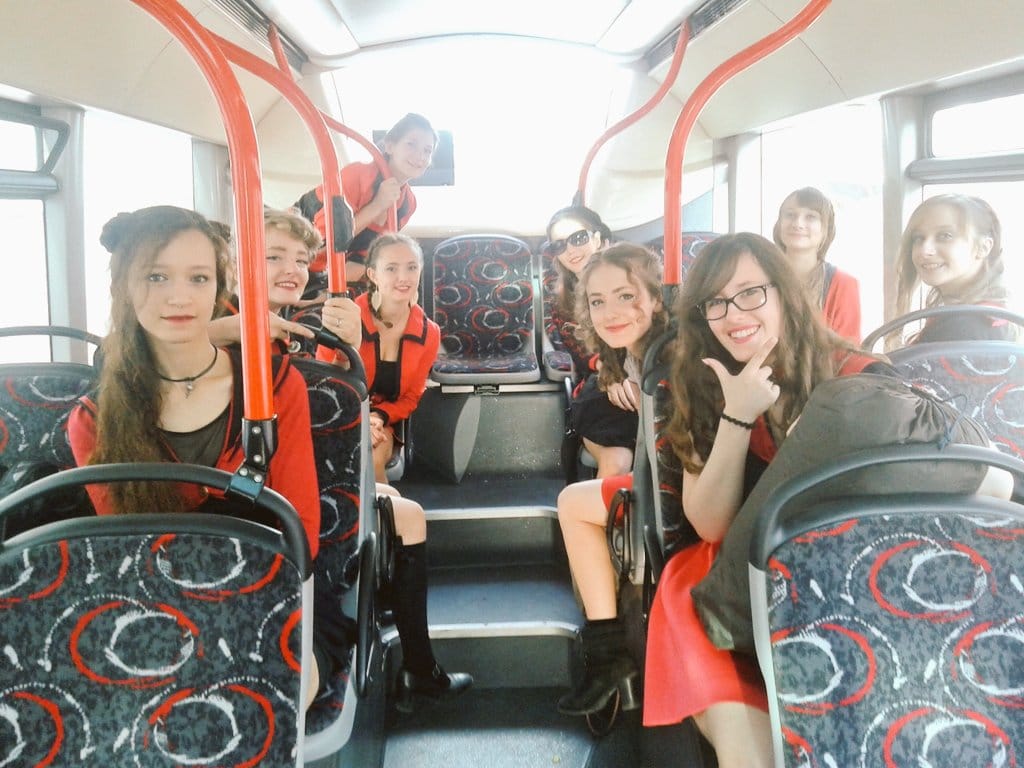 nally *yes finally! But you know, I’m a very talkative person!* get to the D-Day ! How nostalgic it is… I don’t even know how to begin…. Let’s get started with bad memories =D ! It’s around 11 a.m., we’re all on cloud nine, confident after our ultimate general rehearsal, we take the bus to Bellecour and there…. How a big stress…. Today the city of Lyon organises a big cycling trail! The train tram is blocked by tens, no hundreds of cyclists who are riding on the roads (whereas it’s obviously forbidden)! At this point I’m thinking: “all right, we are early, no panic, they will just pass and the tram will be able to go on!”. But not at all! The streams of bikes did never seem to stop O.O ! It was like if they were vacuumed by an inter-dimensional rift behind us and that they came back in front of us as to prevent us from going on. And I’m not even exaggerating, I’m telling you! At a moment we though to walk to our destination but with our many luggage we could even not make a way through them -.- Anyway, the tram was eventually able to re-take the road after at least 30 minutes of horns. I think we learnt a lesson from it: we’ll always be really early for our shows! But despite all that, we made it on time! *It would have been really embarrassing for us to be late for our first collaboration with the consulate ^^’’*.

As soon as we arrive to the stand of Japan, we are warmly welcomed by Ms. Atsuko Eguchi, in charge of missions at the Consular Office of Japan, and the team of OtaSekai. Even if it’s September, it’s extreme 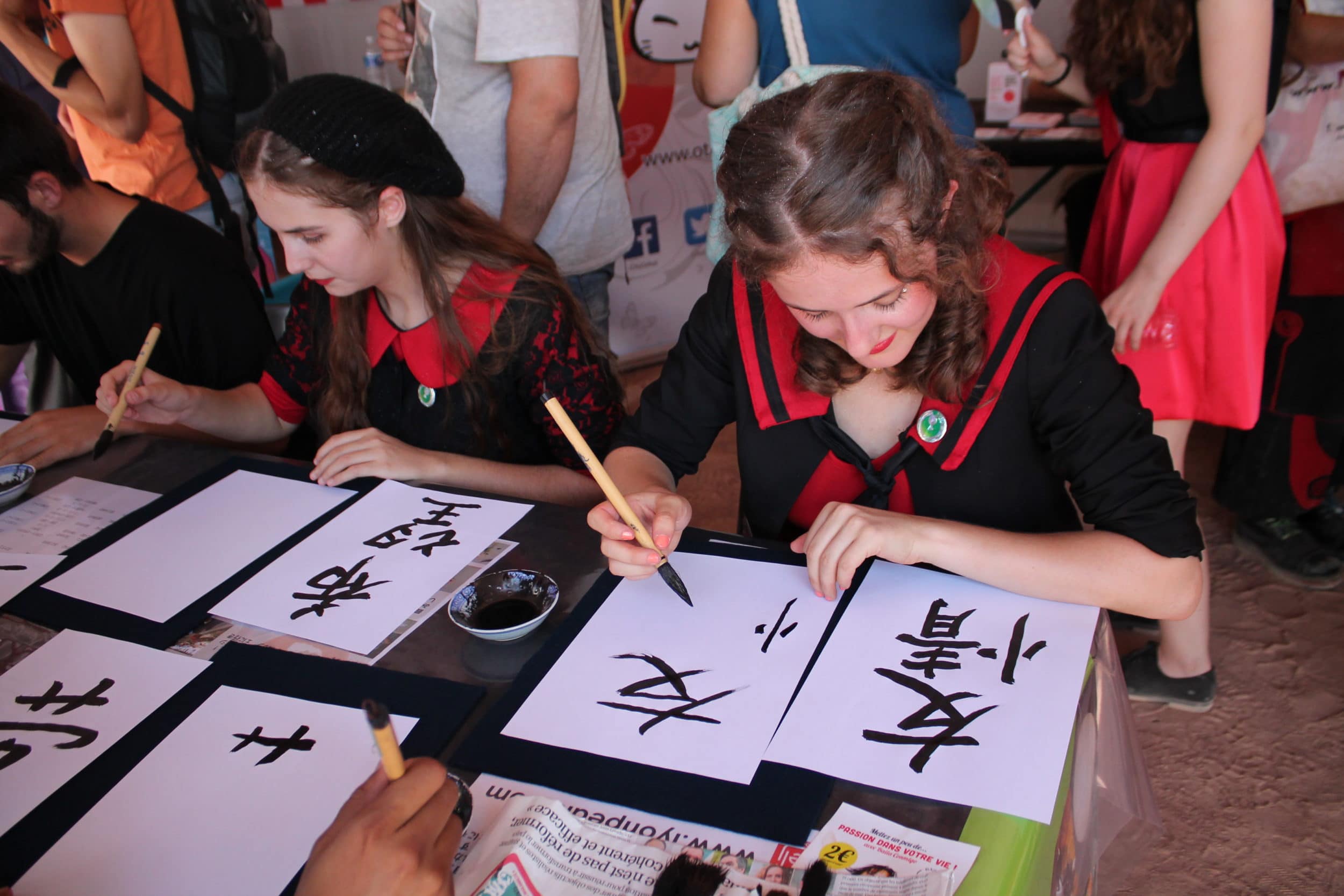 ly hot * and obviously we chose the hottest costumes we could choose, that’s to say those inspired from Ai No Gundan x) ! and you cannot imagine how happy we are to be offered some Kakigori ! (It was the first time for me an 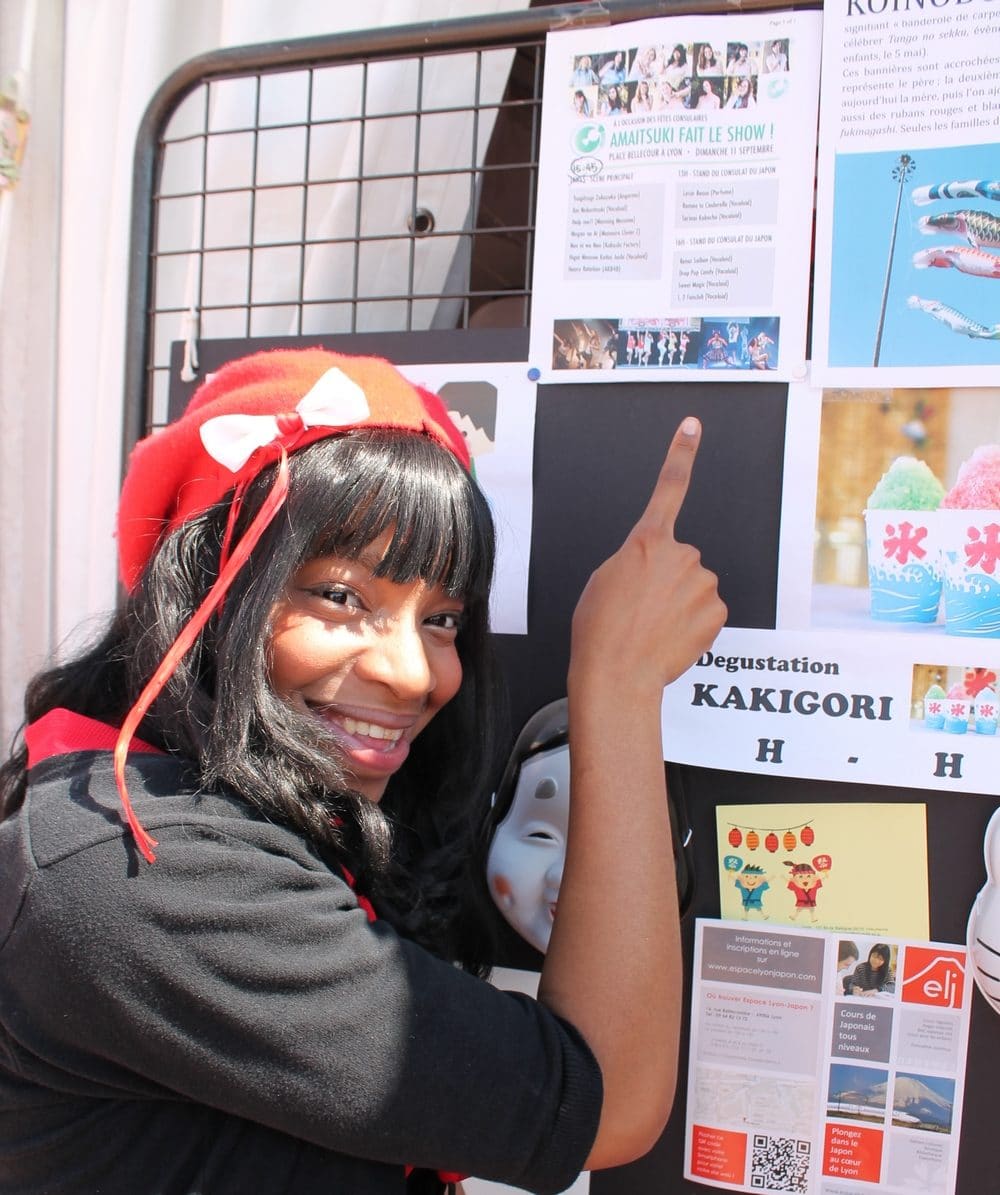 d the matcha flavour was amazing *w* !) Anyway, after our mini-show in front the stand, we have still some time left before the main one, so as random tourists, we take a walk through the many different stands, some of us train at kanji writing, other buy some food, or try desperately to flee from the sun *in vain xD*… And finallay when it’s time for us to go on stage, we’re full of energy and ready to make a success from it! By the way, I want to precise that Ocha deserves the gold medal for cheerings ! If you read this article *till the end x)* be sure that your motivation gave me a lot of energy and confidence whereas I was like “Oh God I hope I forgot nothing, where is So and So ?, We have all the micros ? The playlist is here? You know to whom you’ll give your micro for the 2nd song? blah, blah, blah…”.

Well I won’t discourse on the performance, I’ll just let you judge the videos which are gradually published, but in any case, it was just the best stage e 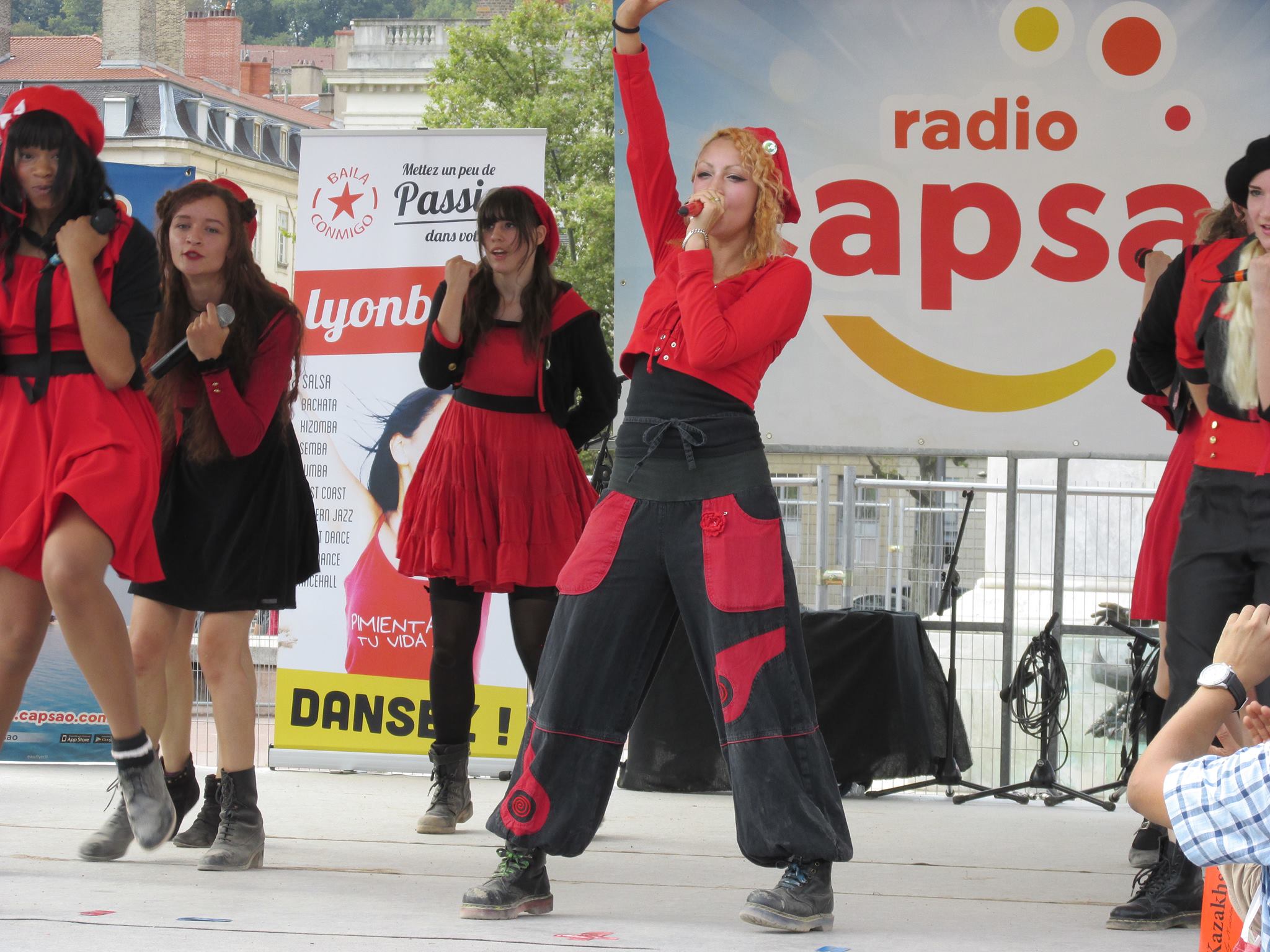 ver! I admit it’s certainly partly due to the “T form” of the stage, but even without taking it into account, the public was really motivated! Hum, well, motivated… It’s not like if they were doing wotagei or anything else like that but we could see *at least I could x)* in their eyes that they were happy, and even impressed ! * Yes it’s important to compliment oneself sometimes*, a lot of them stayed during the whole performance! As you may guess, the public didn’t know anything about this aspect of Japanese culture. Some of them came to see us at the end of the show and asked for calling cards or to say that they came for a more traditional concert but that eventually it was unexpected but great! What more can you ask for? It’s amazing to be able to share a passion which people don’t know anything about =)!  How happy was I! But I kept the best for the end *obviously*! The consul, Mr.Kobayashi himself attended our show and we had the opportunity to talk with him for a while after the live! You can be certain that the photo we took together will open the collection of Amaitsuki’s trophies *O* ! 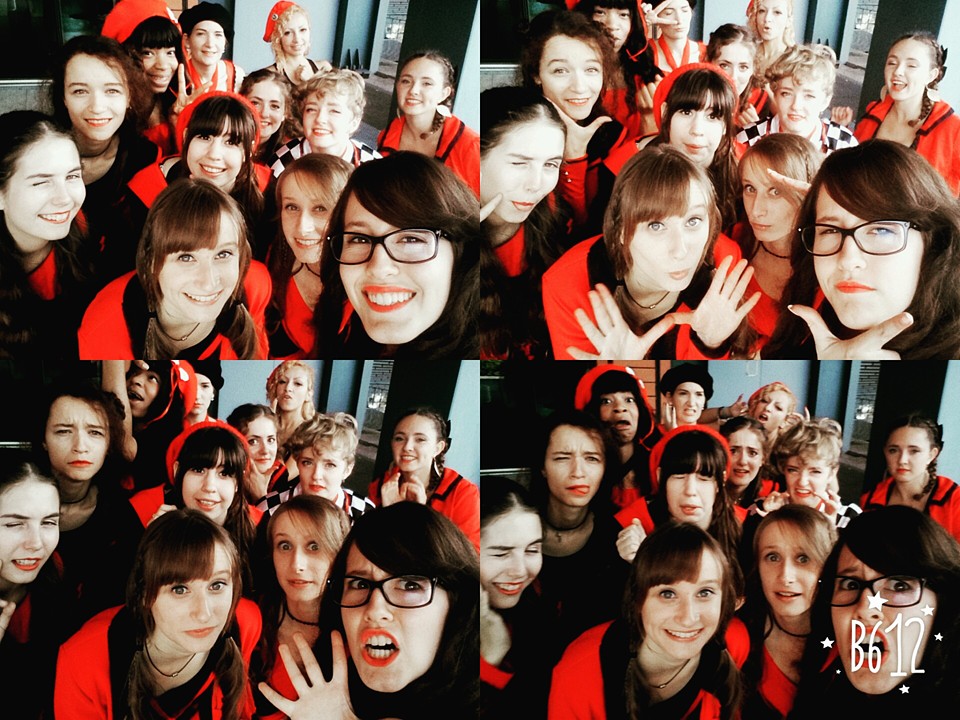 Well, I see that my article is already 2 pages long on Word…. I think I’ll stop my report there x)! And even if I couldn’t write everything, this weekend was just so amazing!! We went back to our respective cities with stars in the eyes and only one thing in mind: to go back on stage as soon as possible! We also want to thank one more time the consulate of Japan in Lyon for its invitation, otherwise we wouldn’t have experienced such a live! 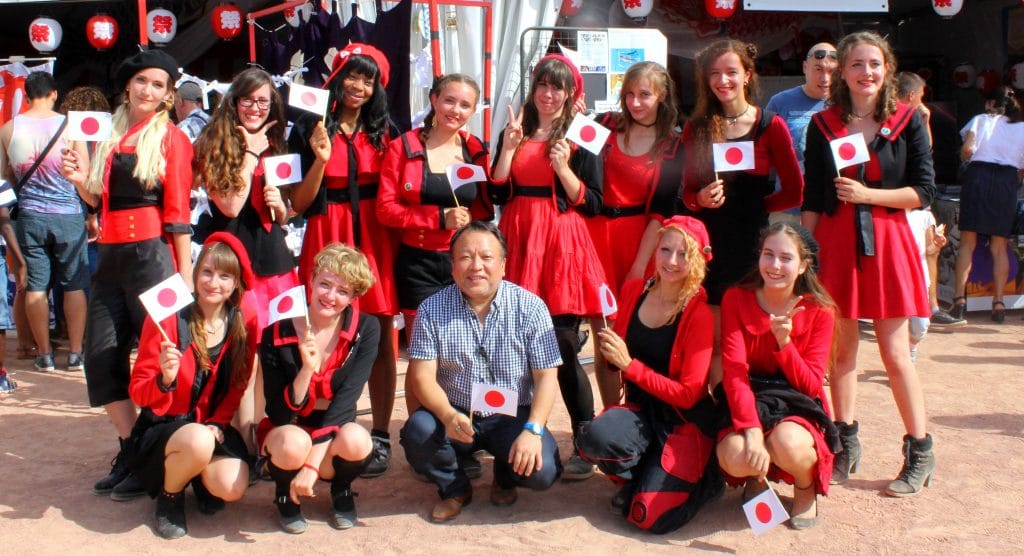