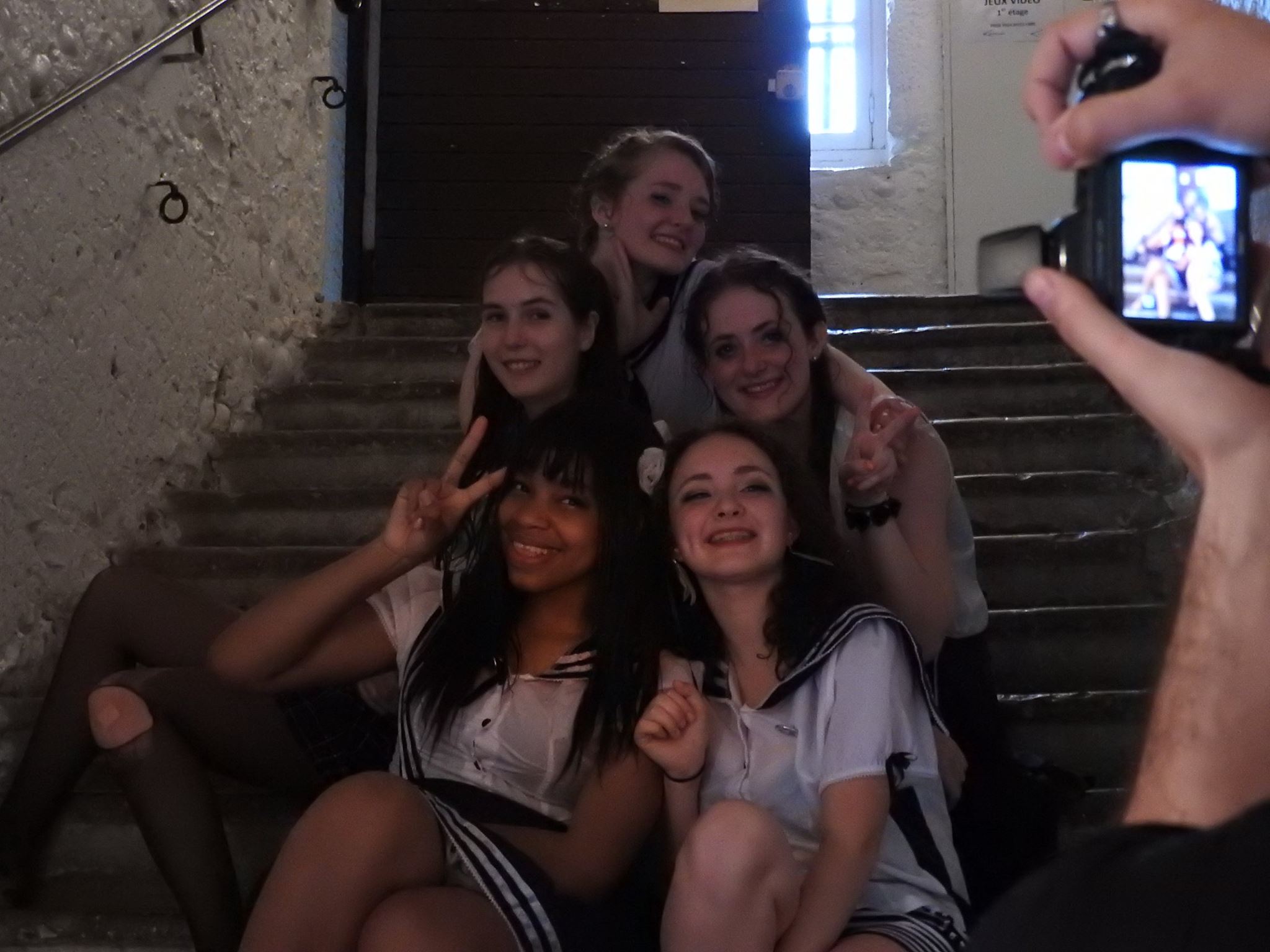 Our new story begins on a sunny Tuesday. I’m ready to take the train to Lyon at 5p.m. The show is scheduled for Saturday but still, as I’m studying at university, I’m on holiday right now !! Youpii \(^-^)/ That’s why I’m going to Lyon earlier in the week than I’m supposed to. This way, we’ll have more time to train and organize ourselves for the upcoming show. I schedule to take the bus in advance in order to be on time for my train when I discover that there is a concert of Coldplay in the surrounding area -.- To avoid the traffic jam, I take the bus at 3p.m to eventually wait for my train 2 hours long because there were no traffic jam at all（￣ー￣）. Anyway, I’m ready for the 4 hours travel in first class (yes it was just 3€ more to travel in first class, what a chance for me !). During the travel, I read my book La Pierre et le Sabre from Eiki Yoshikawa and ate  (*°∀°)=3.

A calm travel without any problem ? It’s so rare that it deserves mention ! I arrive at Lyon’s train station at 10 p.m, Ringo and her mother are there and take me to my hotel, that’s to say Ringo’s house obviously ! *Did you really think I would have pay for an hotel ?! No way xD* I just arrived that I went to bed. 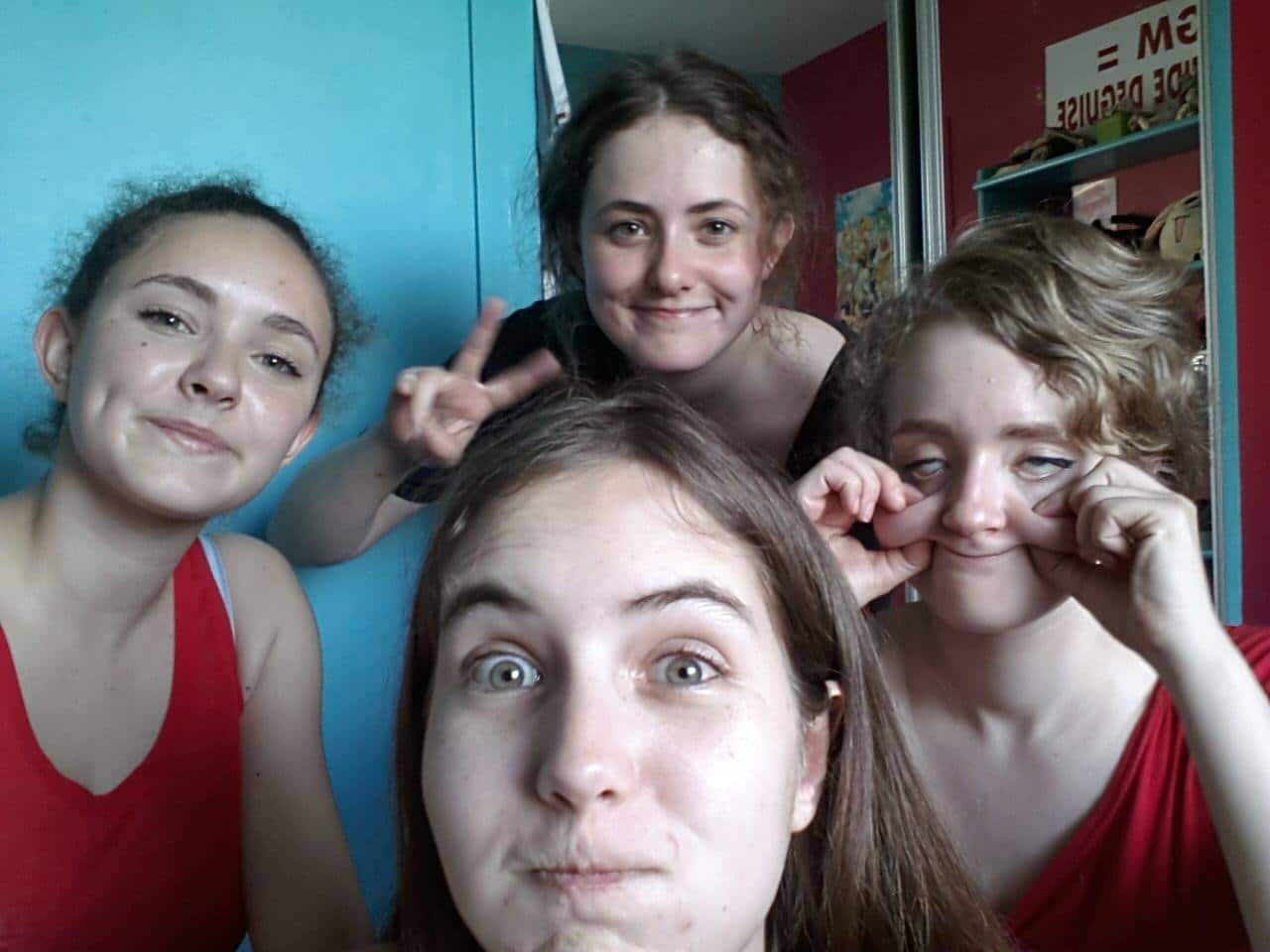 Reishi has class, Kyuuri and Choco are working, so I mostly train with Ringo all week long. All is going very well: while Ringo is training, doing the same mouvements again and again, I take this opportunity to have a rest. On the evening, Reishi comes back from school and we can train a little bit together. Unfortunately she had some health problems (nothing severe but still it’s better to be careful) so that we had to adapt our setlist. Kyuuri joined us later and we had rehearsals, the 4 of us, in a small room x) Ringo even bruised when she fell on the ground （￣□￣；）.

It was the first time for us to have a stand so we prepared a cork board with photos on it and a computer with videos from our YT channel etc…We also created badges with the logo of the group to sell ! 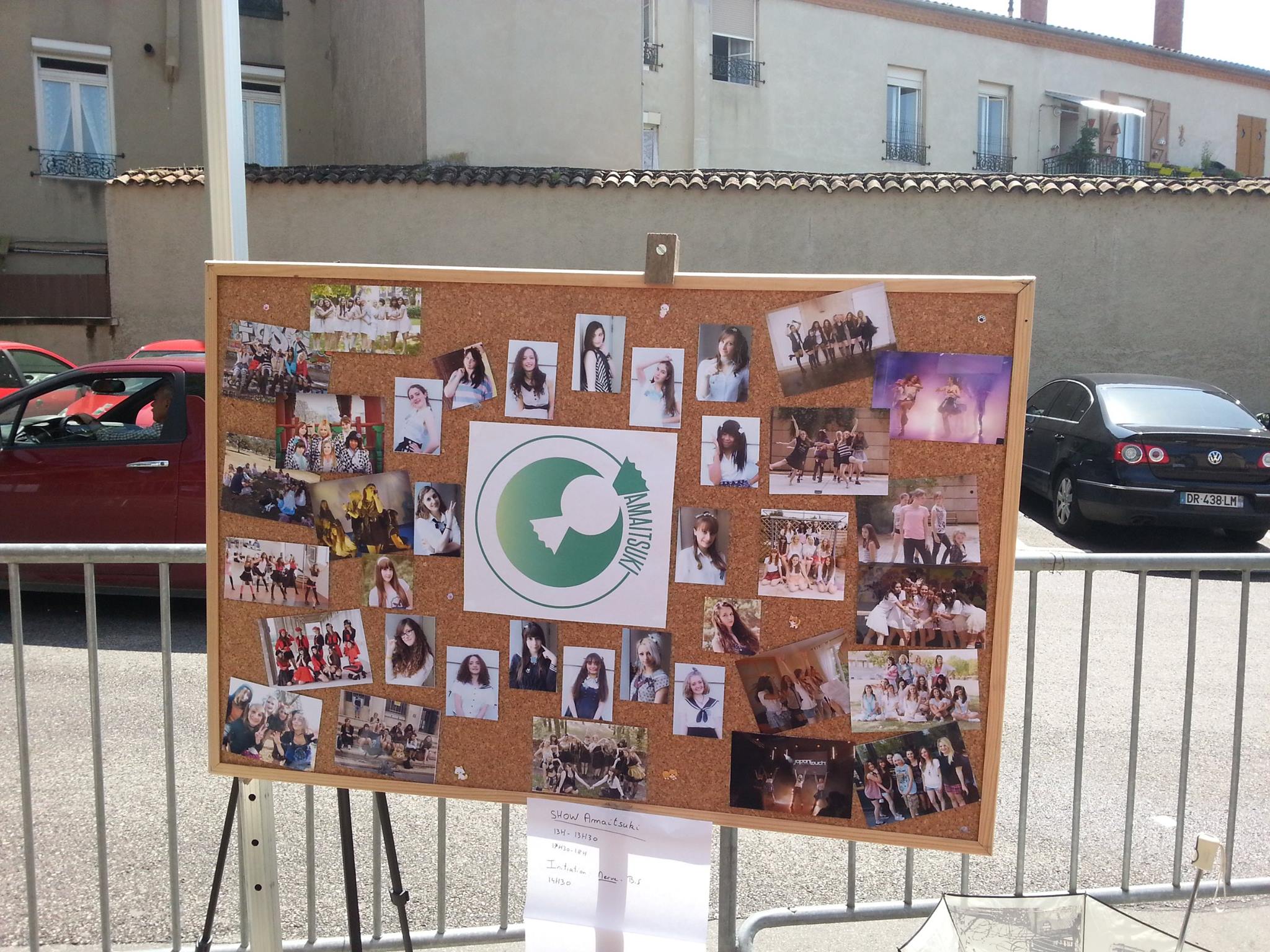 We arrive at Neuville-sur-Saône in front of the MJC (youth cultural centre) at  9 a.m and Choco is already there. We have time before organising our stand so we choose to train with the 5 of us to see our positions in the formations. We’re ready for the show, on the verge of installing our stand when it’s starting to rain (Ｔ▽Ｔ). As we were supposed to remain outside all day long, it was kind of problematic. With Kyuuri we are searching for help when a member of the staff finally gives us the solution: sharing our stand with Aoi Sora cosplay. We’re saved ! Drawback ? It’s really small and we have to use our umbrellas to protect ourselves (and my compture as well ^^’’).

Next step: the initiation ! But we forgot the mp3 soundtrack（￣□￣；）Fortunately, this song is also contained in our playlist for the show ! Let’s get started ! Choco is in charge of the activity and we just have to be her backdancers. Some girls who saw us previously on stage got involved, they were really nice and we eventually invited them to go on stage with us later !

Mission accomplished ! We now have time to held the stand and take part to activities proposed in the convention (event). 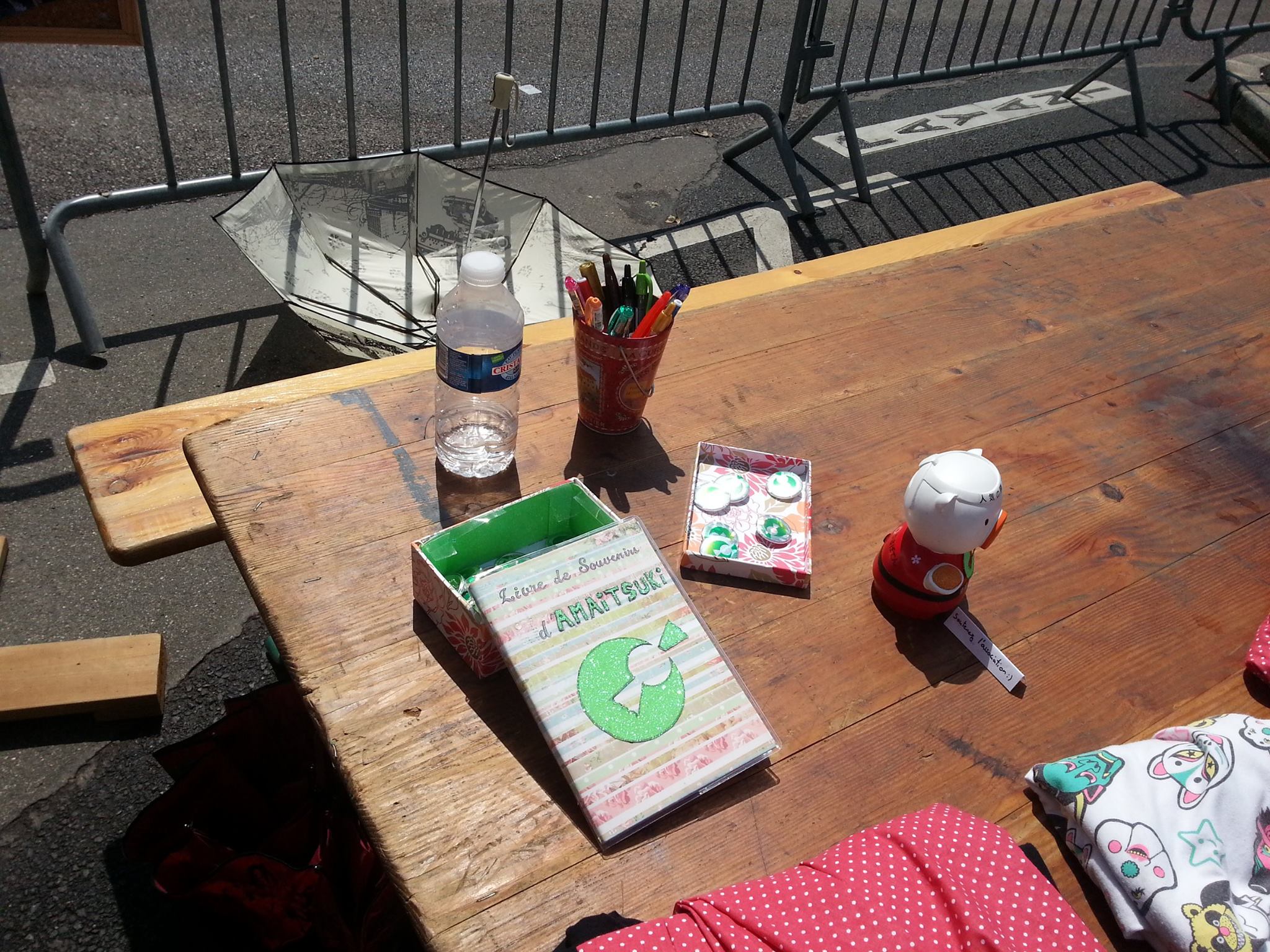 We’re close to the time of our second stage and…the clouds too xD ! Let’s pray for the rain to come after the representation ^^’’ ! Just before us, there is a demonstration of martial arts so that tatamis cover the stage. We decide to help the staff to take them away but obviously, considering my legendary chance, I succeed in putting my foot in a manhole -.- !! I ensure you that’s true and that does not just happen in drama ! One bar really missed on the manhole O.O I now have holes in my tights, great… But you know the show begins in 2 minutes so I’ll go through.

The show went on and It could have been worth but…it’s still complicated when we are dancing on a playlist that is not the good one ! 2 songs were supposed to be short versions but they were not…We adapted us as we could and Kyuuri and Choco went on stage to help me during my solo, when I was totally wet by the rain, my feet sliding down on the stage (I took off my shoes because it was too dangerous). The song is finally over, I get off the stage when the girls are shouting to me: “Go back up, go back up ! We do another one to finish”. So I go back up and dance the last song with the others. Our hairs and clothing are wet, it’s almost, as we could say, anything but we are having a lot of fun and the audience said later it was amazing to go on dancing with this weather. It was surely the first time for me to hear such applauses. Even if it was less crowded than Japan Touch Haru, people were very warm. 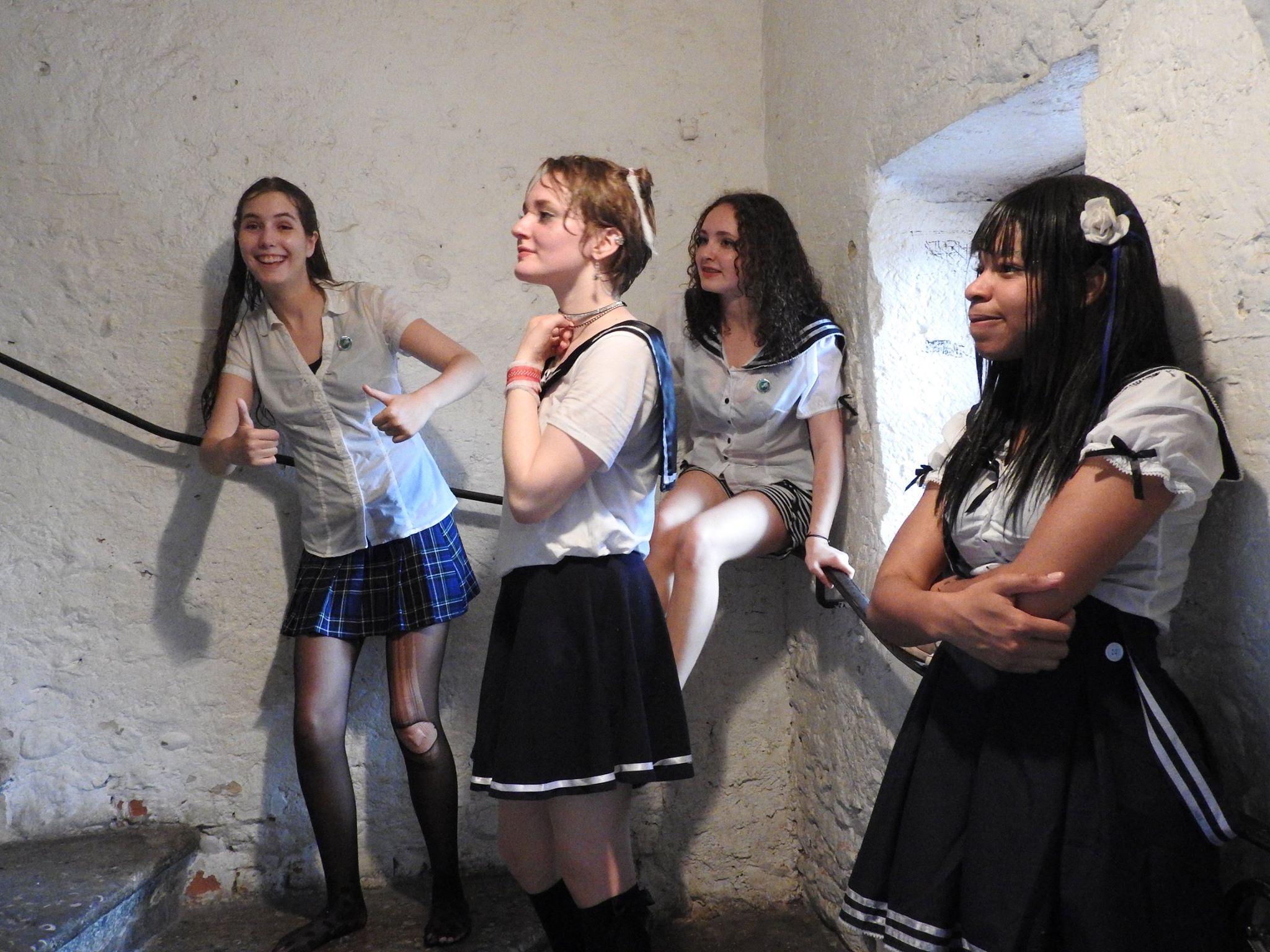 We eventually get off the stage and a photograph approaches us asking to take photos ! We are looking at him amazed :”Do we really have to take photos now ? You know, we’re wet and stuff…it won’t seem very professionnal right ?”. He just answers “No problem, it will become great souvenirs of your show here !” Ok, got it xD ! We accept and it’s the beginning of a one-hour photoshoot *with holes in my tights but anyway…*

It’s nearly 7 p.m, we have to go back to Ringo’s house to eat and wash before I return to my hometown. Kyuuri, Ringo and Reishi don’t even accompany me ! Ahlala, what a pity ! Friendship is no more what it used to be x) But I understand their feeling, the day was tiring ><

This time I travel in first class too ! Yeah ! I would say that this week was in a way chaotic but it was also one of the best show I ever did, it was soooo fun ! As I watched the videos I thought that we improved a lot and that we’ll do even better next time !