Epitanime 2016 or the Legend of The Higher Quality Member 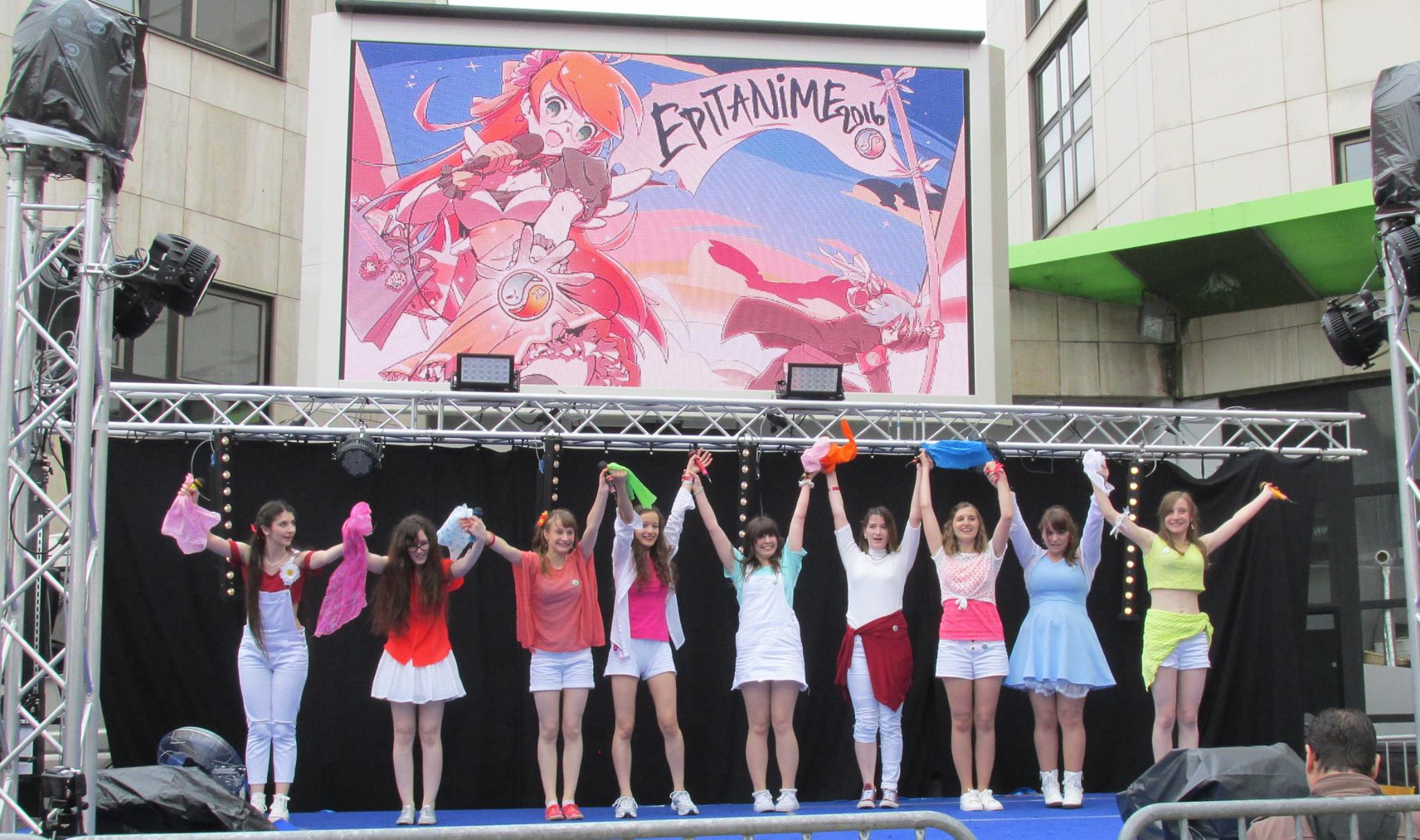 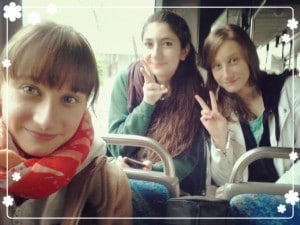 Our story begins earlier than usual! Well, yes, this time we had time to train ~ yes, finally *-* ~ because first, the major part of the members is living near Paris, and secondly because we are students MOUHAHAHA ! So we didn’t have lessons anymore * well we had still our exams xD*. So it’s 1 week!! Yes, you’re not dreaming: 1 WEEK before the show that a part of the group met to train! All thanks to our international Suika who was brave enough to make the return trip Lille-Paris in one Sunday, waking up at dawn to take up the challenge of Epita 2016, and to Nanoka, Mikan and I * yes it’s important to congratulate oneself sometimes =D* who faced the SNCF’s strikes and took the bus and then the train for 1 hour and a half to arrive (instead of 30 minutes normally -.-) ! 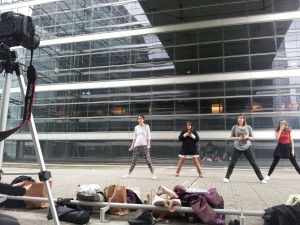 So we did the spadework for the playlist at 6 *I think we were 6, I hope didn’t forget anyone xD* and we sent the videos to the others to help them learning the movements we corrected together. It was nice until… Yes, I guess you guessed… We were in May… so “off we don’t go to the garden” … It rained cats and dogs -.-. As a result, we went to the commercial center and waited for the rain to stop… Until Painapuru says, after 2 hours: “You know what? I know where we can train with panes not being soaked!” and we were like “Wait, you’re serious O.O?! Why didn’t you tell it before x) !!”. Anyway, unexpected events always occur in Amaitsuki, it’s what makes Amaitsuki’s charm xD ! 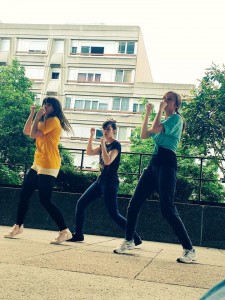 Let’s go forward in time, I wrote that most of us were students, right? We took advantage of it, training on Thursday (in a very reduced number xD), then on Friday (in a more important number in the afternoon), and finally on Saturday!! All day long!!! And when I say all day long it was really ALL day long xD! Meeting scheduled at 9 a.m. at La Défense, we had to take the train at 7.50 a.m.… On Saturday… T^T *ok, I won’t complain cause I decided to impose this schedule with my dear Suika xD! *(yes we are the little demons from the North MOUHAHAHA). As I recall, all went well, except we had some problems because we did not all learn on the same videos, or when we did so, the original dancers themselves didn’t do the same movements x)! 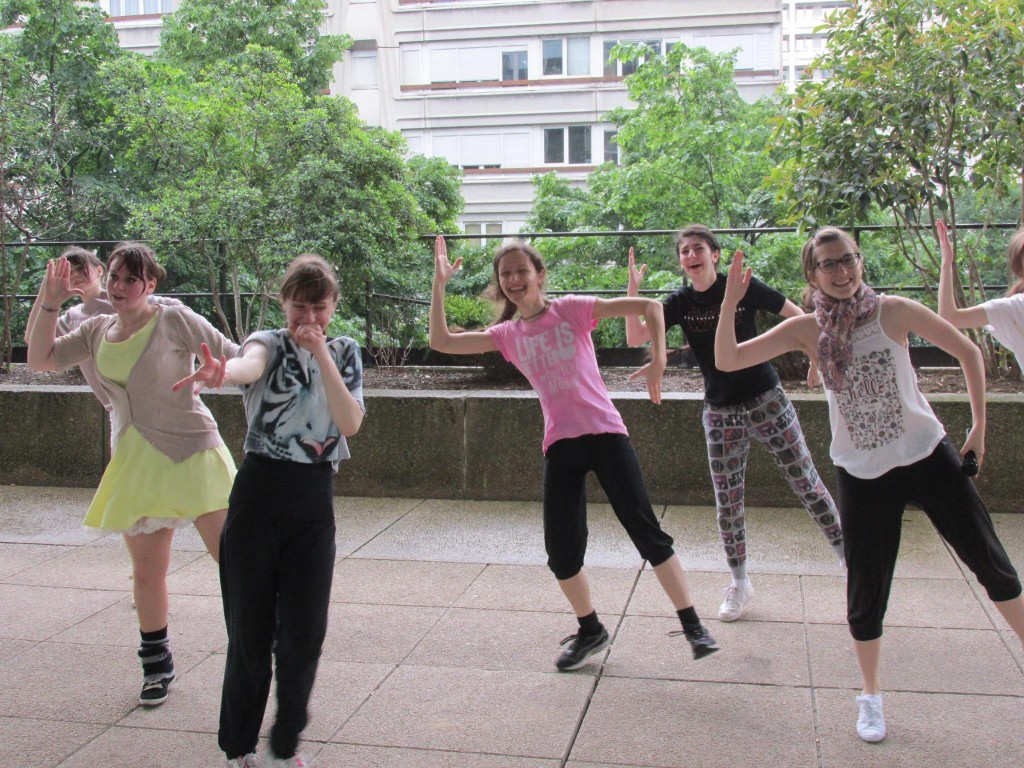 But despite of the difficulty of the playlist we did well… Because yes we chose a lot of dances with a great number of dancers * and it’s not obvious but it takes time to assimilate all positions even when we learned them before, alone*, and choreographies with complicated rhythms to be synchronous. What else? We had young cameramen thanks to whom you could watch a making-of! * and see how serious we are during rehearsals x)*. That’s how this day ended around 8 p.m. (9 p.m. for the bravest, *look, if we trained all week long, we would go over 35 hours a week xD, which is, looking back, what we make during our annual camp =D*) and we came back home because we knew the night would be short x). 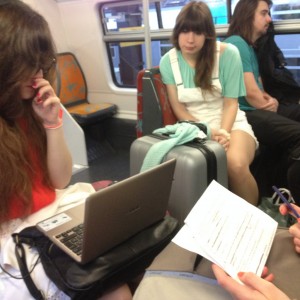 ow *you know it’s long to do one’s hairs, to make up and so on… to also eat secondarily, and take a shower (please be assured we do so xD)*. You’ll maybe think “Those twins are crazy, it’s not a hazard they are named “the robots” in the group!”, but finally 2 hours is not so much… I guess x). Anyway, departure at 6.30 a.m. with Nanoka, Kurimu and Ocha to be at Epitanime at 8 a.m., except it’s 6.27 a.m. and there is nobody on the platform (except to 2 of us)! Knowing that at that time there are trains only every 30 minutes, I start worrying… So with Mikan we harassed them with messages and obviously they did not answer right away * it would have been too easy!* But Ocha finally picked up the phone and told me, breathless: “yes we’re coming, the fact is that my alarm clock didn’t ring, and Nanoka thought we wanted to wake up a few minutes later so she didn’t wake us up, we quickly packed our suitcases and didn’t even take time to eat. But in the rush, Nanoka forgot her Navigo card *oh god, that crowns it all!* so she has to buy a ticket !”. Hopefully, I see them going through the turnstiles *do we really name it like that? x)* at 9.29 a.m., we rush in the train and it gets going *phew, that was a close shave !*. I love all those unexpected events, it spices things up x)!

We looked… strange in the train with our stage outfits and looking like death warmed up *5-6 hours of sleep is not that much…*. But despite everything Ocha found the courage to review her dances watching the videos of our trainings * how professional is she! The 7th generation is definitely surprising! *. But no less was to be expected from The Member of a Higher Level of Quality! [There you don’t understand what I mean *I even didn’t get it right away to be honest* so PAAUUSE, I explain: In the 7th generation you have Mizu and Ocha (and also Reishi but we don’t care for the explanation x), both names mean respectively “water” and “tea” in Japanese. Do you get it now? Tea is simply a refreshment of a higher level of quality than water! * no it wasn’t that much complicated, sorry to deceive you…*] 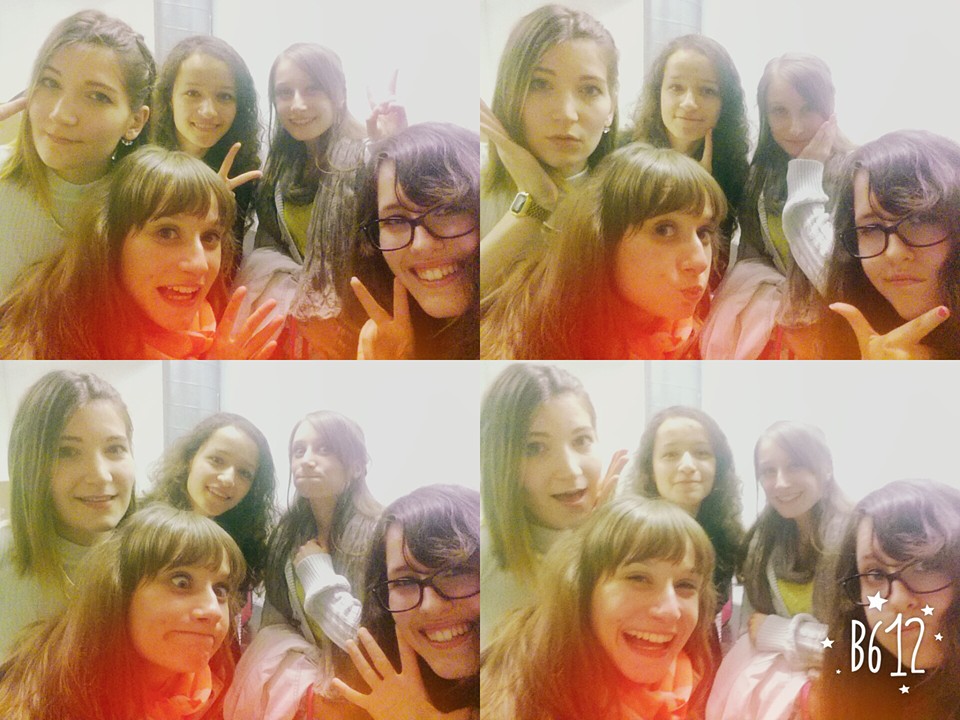 Well, what was I saying? Oh yes, we arrive at Epitanime, the staff checks our names on the list, we go in, we are brought to our green room * we had a green room!! So cool!… well it was a class converted into a green room but it was quite cool*, we ask the staff to go on stage to see the positions and we realize that because of the arbors installed for us to be protected from the rain, the member who is the center has two poles in front of her and we can’t raise our hands too high or we would catch ourselves on the iron armature or the hessian… which, I’m sure you would agree, is not that cool x). So we had no other choice but to pray for the rain to stop during our show * cause the staff was really efficient and they removed and replaced the arbors according to the weather*. Then rings 9 a.m., it’s the opening of the convention, we leave the stage, and return to the green room to review some details, especially the use of micro stands *no we didn’t buy them, so we couldn’t train with… But we somehow managed to control them x)*. 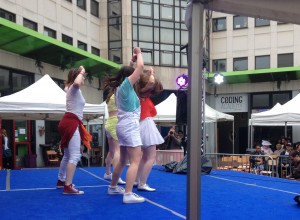 Finally it’s 11.45 a.m., the show starts… and the sun shines! Just kidding, it was always so cloudy *well, we’re not in a fairy tale*, but at least it wasn’t raining =D ! All went well, the public was quite shy but our beloved wota were fired up ! We really had a great time, especially during the medley *you’ll see it later MOUHAHAHA, I keep you waiting* which was so fun to act ^-^ ! But THE memorable thing is…. Drum rolls…that the RISIN’ CREW came to see us!!! I was so happy *O*, they are so cool when they are dancing! (and even when they are not actually xD) *ok they came to see Painapuru but I don’t care, man lives by hope as they say !*. 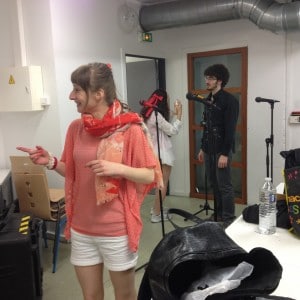 Wait it’s not finished! The best is yet to come: they were in the same green room as ours! *ok it was a little bit crowded… we were 14 with our staff and I think they were more than 20 x)* . But they trained right in front of our eyes while we were eating. I admit I was quite hypnotized: they are even more talented in reality than on their Youtube Channel ! That being said, I’ll stop fangirling x) but let me just add one thing: Having finished their live (which we also watched), Painapuru asked for a photo with the two groups (she is part of both and wanted a photo joining her two “families” in a way) and they accepted! (Honestly I could never have asked xD). So you’ll certainly see this photo on our Facebook page *I can’t wait for it *O* *. 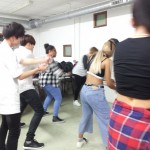 Just wait, I have still one last thing to write: one member of their staff came to speak with us and what she said will stay in my memory for a long time! In short, it’s what she said *no, even if I’m a robot I can’t remember word-for-word what she said x)*: “I don’t know anything about Jpop, I haven’t watched any live of Jpop until today, but I was pleasantly surprised ! Your good mood is what emerges from your performance, we directly see how much you like what you’re doing but also that you’re sharing the same human values. Through your dances, you succeed in communicating a message of peace and harmony. I also had the impression that the links between all of you were really strong.” I was deeply surprised she could see so many positive things about us in one single performance. Anyway, because AT has always had as goal to send this kind of messages, it warmed our hearts that an external person noticed it! Thank you so much! 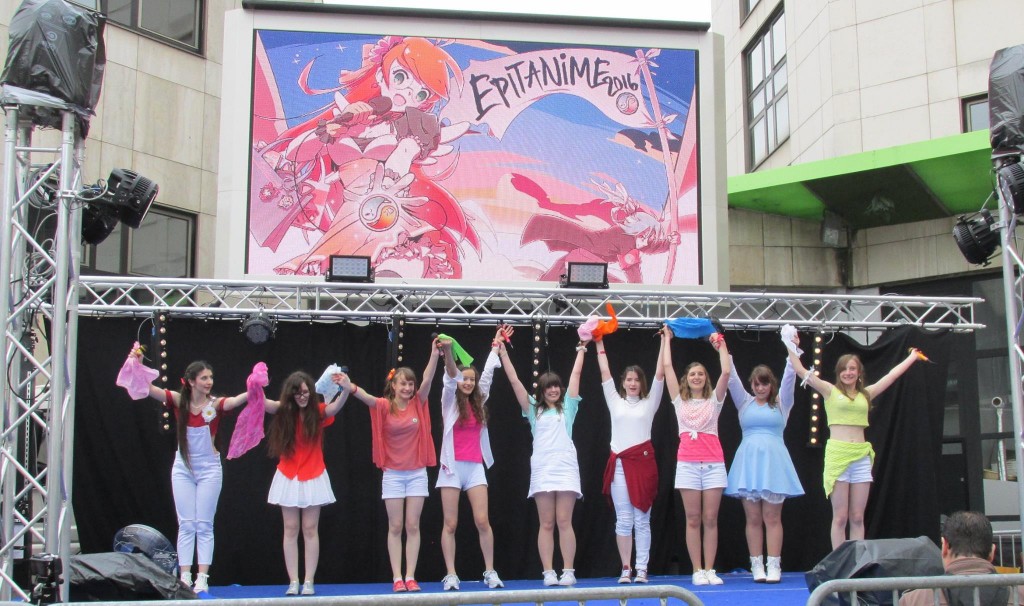 This beautiful comment brings us to the end of this article. Epita is always exhausting because we stay up late and we wake up early, but it’s always a pleasure to perform there! We hope next year we’ll be part of the adventure too! (without having an internship the day after on the other side of France because 5 hours of car after 1 hour and a half of train and 45 minutes of show, is not cool at all -.-, but these are the joys of this work =D ! Is there anything we won’t do for Amaitsuki ?)